Freedom of Expression and Freedom of Assembly under Attack in Greece, as Government Leads Hunger Striker to Death.

During the past weeks, Greek people have become witnesses of gross violations of their political rights and a manifest contempt to the rule of law, unprecedented since the fall of the Greek military junta in 1974.

Prisoner Dimitris Koufontinas, member of the now dissolved guerilla organisation ‘17N’, has been on hunger strike for 56 days and thirst strike for 11 days, demanding access to justice in order to claim his legal rights regarding the prison in which he is to serve his sentence. The legality of his demand has been acknowledged by  Amnesty International, the Greek Ombudsman, the Hellenic Association of Judges and Public Prosecutors, lawyers, academics, and the majority of the opposing political parties.

However, the Government continues to deny Koufontinas his legal rights and seems determined to lead him to death. Thousands of citizens have taken to their streets protesting against the Government’s defiance of the rule of law. In response, the Government has decided to take an even stricter approach by breaking up demonstrations and using brutal police force against peaceful protests. Several people have got arrested simply because they participated in some demonstration, and in many cases false charges have been pressed against them. Press photographers recording the demonstrations have also been attacked by the police force, manifesting the government’s hostility towards freedom of the press.

The attack against democracy has even infiltrated social media. In the past few days, Facebook has been restricting or deleting the private accounts of lawyers for putting forward legal arguments in favour of Koufontinas’ case, journalists for criticising the government for its current stance, and press photographers for uploading photographic material depicting the mass demonstrations and the brutality of the police forces. Even pages of political organisations, including Synantisi’s page, have been restricted or deleted for pronouncing the legality of Koufontinas’ rights. Posts have been hidden, comments have been deleted, and even online events and press conferences pertaining to the issue have been banned. To justify Facebook’s policy, its administrators have put forward the outrageous claim that all these people and organisations are promoting terrorism.  This profoundly groundless excuse seems to be perfectly in line with the pro-government media’s attempt to colour any dissident act as an extreme action to justify the Government’s vengeful attitude against Koufontinas. Freedom of expression and assembly are under attack in Greece. Τolerating the State violating Koufontinas’ rights today creates a bad precedent for the violation of everyone’s rights tomorrow. This case concerns us all. This is why we fight back. This is why we need your support.

For dignity, justice, and freedom. 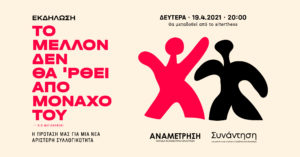